In the afternoon of October 30, a magnitude 7 earthquake struck Turkey and Greece. A search-and-rescue (SAR) operation is on-going and on November 3, a three-year-old girl was rescued 91 hours after the earthquake hit. 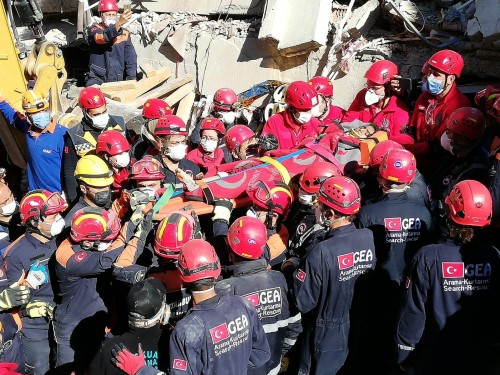 “87 GEA SAR team members were dispatched to debris sites along the Aegean Sea in Izmir immediately after a 6.6 earthquake struck at 2:51pm on October 30. My team began SAR operations in the Manavkuyu neighborhood, Yagcioglu Site, Block A, and continued working throughout the night. By 2 am upon notification from another debris site, Doganlar Apartment, our team initiated a parallel SAR activity. After what felt like forever, GEA SAR team members rescued a mother and twin girls from the debris on November 2 and on November 3, we rescued a three-year-old girl who was trapped under the debris for three days. The GEA SAR team used equipment given by A-PAD. We would like to thank you again for the support we received from the people of Japan.”

A-PAD signed an MOU on disaster assistance partnerships with GEA, a Turkish SAR team, in 2016 and has worked to build the capacities of emergency assistance teams. Since its establishment in 1994, GEA has been providing SAR operations around the world. As a member of INSARAGA, UN’s International Search and Rescue Advisory Group, GEA participates in drill exercises and trainings upon invitations from difference countries. In August 2016, A-PAD participated in a ten-day training in Istanbul with a Taiwanese rescue team. The training was conducted under various scenarios including night time survivor extrication, entering damaged buildings, and rescue operations by SAR dogs. At the training, A-PAD provided vehicles and rescue equipment including a generator, chain saw, stretchers, night light system, scope cameras, and scanners. The equipment was utilized for the SAR operations during the earthquake disaster.