A-PAD Sri Lanka distributed relief kits for pregnant women and families with infants among the 110,000 affected people whose houses were inundated or had collapsed due to the floods on December 22 in northern Sri Lanka. Responding to a request from the Kilinochchi district government, A-PAD Sri Lanka delivered and distributed the relief goods to the most venerable groups. 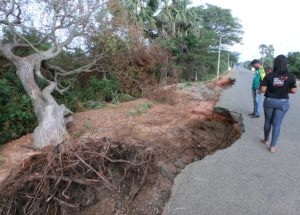 On January 20, A-PAD staff from Japan joined local program coordinators at A-PAD Sri Lanka to visit the Kilinochchi district located 6 hours by train to the north from Colombo. The group interviewed a peanut farmer who sought shelter at a community house from torrential rains. He said, “I heard the forecast warning of heavy rain on the radio, but it was already too late. Our home was quickly inundated and the water was already up to my knees, so we headed for the community house, but my mother fell and suffered from a broken bone, and so now she has become bed-ridden. My peanut fields are also under water. I cannot plant fresh crop unless I replace the topsoil. Also our house had to be rebuilt on higher ground.” While waiting for relief funds from the government, to save time, the farmer has already started building a new home. 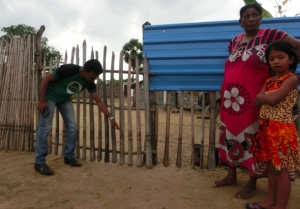 <Flood line indicates that waters had been knee deep> 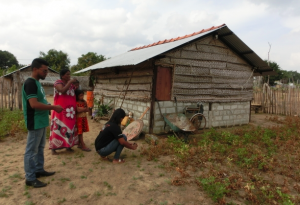 The community house that is used as emergency shelter consists only of a concreate platform with a roof. The sides of the building are completely exposed to the elements. Foods is distributed and shower can be had at locations distant from the shelter. The worst affected area was the scene of heavy fighting between government troops and Tamil insurgents. Recently halls had been dug in search of unexploded ordnance resulting in a worsening of the flood in the area.