The joint A-PAD/Peace Winds Japan emergency relief team has set up an inflatable shelter in the quake affected town of Mashiki. The shelter, which during normal times takes up about one cubic meter of storage space, when inflated can accommodate 100 people. As of midnight April 16 some 400 evacuees had found refuge at 12 temporary shelters in Mashiki. After consulting with local authorities in charge of emergency relief, the joint team set up the inflatable shelter on a grassy area adjacent to the Mashiki Athletic Center, which was no longer capable of accommodating the flood of evacuees. The inflatable shelters were first used during the 2004 Niigata Earthquake. Unlike wooden or steel structures which cause injury when they collapse, the light materials of the inflatable shelters are particularly useful to accommodate children and the elderly. 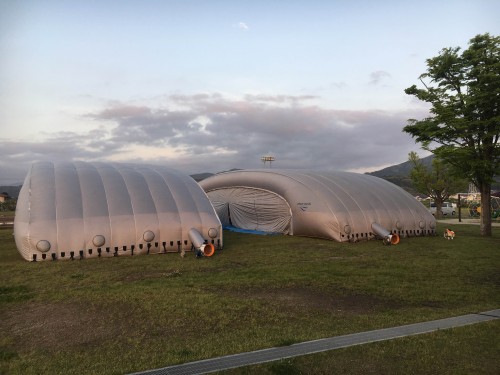 Contributions to A-PAD can be made through the Japanese Government’s “furusato nozei” (hometown tax benefit) program for Japanese, credit card, or bank transfer.

3. Bank transfer: We are grateful to everyone making a donation by bank transfer.

We would appreciate it if you could cover the fees of both sender and receiver. Thank you very much for your support.