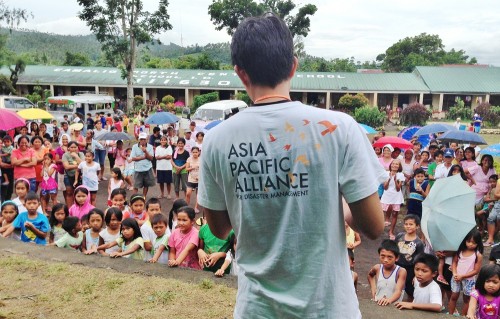 In response to the needs of the Mayon volcano evacuees in the Philippines, Asia Pacific Alliance for Disaster Management (A-PAD) released 92,000 USD from its emergency response pool fund to its Philippine representative Citizens’ Disaster Response Center (CDRC). CDRC, together with its regional center TABI (Mutual Aid for Bicol), surveyed the needs in the affected municipalities and came up with a relief program to distribute food and hygiene items to 5,000 families currently taking shelter around Albay province.

According to the National Disaster Risk Reduction & Management Council (NDRRMC), a total of 12,857 families or 55,567 persons affected in 40 barangays (villages) in 2 cities and 5 municipalities of Albay Province were evacuated to 48 evacuation centers as of Oct. 8, 2014. The Philippine Institute of Volcanology and Seismology (PHIVOLCS) maintains an Alert level 3 over Mayon Volcano, meaning magma is at the crater and that a hazardous eruption is possible within weeks.

Inside the evacuation centers, evacuees complained of overcrowding and lack of privacy. As many as 20-30 families are sharing a room in some schools so classes could continue. With this living condition, sleep and rest are difficult and proper hygiene is almost impossible. Evacuees face increasing physical and psychological risks such as spread of infectious diseases and feelings of frustration and anxiety. 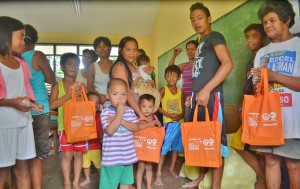 The local government is expecting the evacuees to remain in the evacuation centers for at least 3 months, considering the heightened activity of the volcano.

However, many residents still go home to watch over their belongings or to gather in crops.

“After evacuation, our source of income has been reduced. We know it’s dangerous to go the danger zone, but we have to earn money”, Evelyn Padua, evacuee, said.

Many are also worried about the effects to their and their family’s well-being. One of the evacuees, Jeronimo Octavo, said “We have been living in this center since September 16th when the government ordered residents to evacuate. Even though the living space is small, it is being shared by around 30 families and there are many children getting sick and several people falling ill as a result. In addition, since there is limited space to prepare food, there are people who go back to their homes and cook food there. I wish that we can return to our normal lives.” 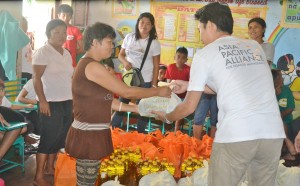 The Philippine government is providing rice to the evacuees but the supply is not stable and the quantity?is not enough for some families that have up to 10 members. In order to complement the rice distribution, CDRC and TABI distributed food packs and hygiene kits to more than 2,000 families in 8 evacuation centers from October 8th to 10th. Each relief pack contained 1 kilo of mongo beans, 1 kilo of dried fish, 12 cans of sardines, 1 liter of cooking oil, and 1 hygiene kit. The distribution will continue on for the following days to support the prolonged evacuation of the residents. 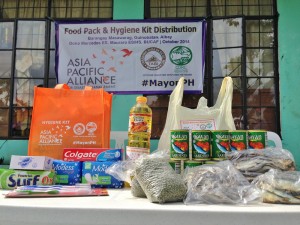 The relief program is also supported by the local government of Albay, who provided free use of their trucks for the delivery of goods. Many evacuees also volunteered during the sorting and distributing of the relief packs at the centers. 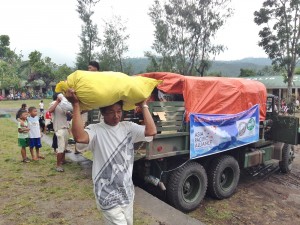