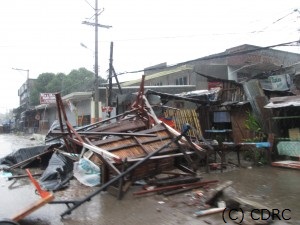 Typhoon “Bopha”(locally called “Pablo”), the 16th storm to ravage the Philippines this year, made landfall on the eastern coast of Mindanao early Tuesday of December 4. It brought rain and strong winds that toppled trees and power lines, destroyed houses and roads, and caused floods and mudslides that forced more than 86,000 to seek refuge in evacuation centers.

The death toll from Bopha rose to 82 Wednesday, December 5, mostly due to flash floods and mudslides. Forty-four of the dead came from the town of New Bataan in Compostela Valley, which was severely affected by flash floods. Local authorities said that at least 98 more were injured and 77 others were missing in New Bataan as of Wednesday. Flood waters reportedly came down from the mountain slopes, bringing with it mud, logs and rocks. Fallen trees and rocks also made it hard for rescuers to immediately reach the area.

In the nearby province of Davao Oriental, at least 33 people were killed in the towns of Cateel, Baganga and Boston.

As of December 5, the total number of population affected in 13 provinces of Regions VIII, X, XI and CARAGA is 24,380 families or 120,627 persons, the NDRRMC said. This figure covered 132 barangays, 58 municipalities, and 8 cities. 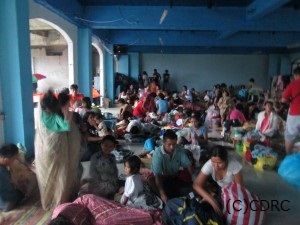 The total number of population currently staying inside the 162 evacuation centers is 17,678 families or 86,912 persons.

Meanwhile, floods have already subsided in Cagayan de Oro City and most of the residents have started to return to their homes. However, water supplies in 50% of the city are still down.

One of our partner on the ground, Citizen’s Disaster Response Center (CDRC)  has already released emergency funds to its Regional Centers in the south of the Philippines to jump start the relief activities. Its center in Cagayan de Oro City has already distributed cooked food in the affected areas.

Those who are stranded at the evacuation center need a further assistant. Even your small contribution like $10 or $20 dollars can save dozens of people to start their life.

You can help those who affected by the typhoon through our DONATION.