Luzon Island, Philippines – Due to an eruption of Taal Volcano on January 12, more than 20,ooo residents in Batangas and Cavite Provinces have been affected and as many as 7,000 people have been forced to evacuate. The volcano ash reached the Manila region, the capital city of the Philippines, and more than 200 domestic and international flights were suspended at Manila International Airport. 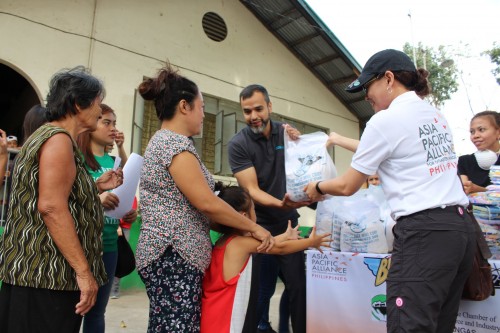 In response to the eruption, A-PAD Philippines has started accepting donations and distributing emergency relief items to the affected population. Please take a moment to read about A-PAD Philippines’ emergency response activities in the past two weeks.
・Distributed 915 relief items in six villages in San Luis Batangas.  Those items were donated through the Davao City Chamber of Commerce and Industry.
・The Citizen Disaster Response Center and A-PAD Philippines distributed blankets and sleeping mats to 192 households evacuated at Banilad Elem School in Nasugbo.
・One of the A-PAD Philippines regional platforms, A-PAD Davao, purchased 1,200 medical masks with funds raised for the affected people. Those masks were distributed to a chamber of commerce and industry in Baccor which was also affected by the eruption.
・In addition, other regional platforms are continuing to raise funds and deliver relief items to the affected regions.

A-PAD Philippines plans to continue providing relief assistance for the widespread disaster.
Thank you for your generous support.
http://apadm.org/donate/