In response to Nepal’s frequent disasters, A-PAD received ODA funding from the Government of Japan for a project titled “Building Multi-Sector Platform for Disaster Risk Reduction and Resilient Community.” On October 31, 2021, project implementation was approved by the Social Welfare Council of the Ministry of Women and Children, and the team began building the national platform.

This project will be based in Kathmandu and implemented in collaboration with a local NGO, National Business Initiative, to build a national platform. Starting with Province No. 1 which is affected by many flood disasters, A-PAD will partner with Youth Development Center to build a regional platform and strengthen disaster response capacity at a regional level including training of disaster volunteers. 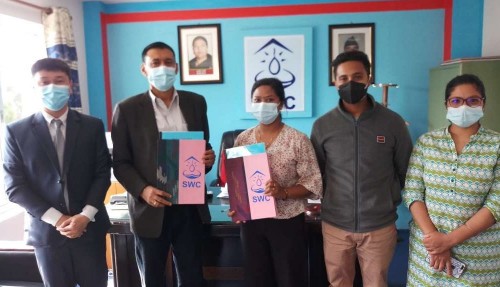 A-PAD began working in Nepal in April 2015 in response to the deadly earthquake. Working with a disaster assistance organization, A-PAD deployed a search and rescue team from Japan with a rescue dog to look for missing people in Kathmandu and Sindhupalchok. A-PAD’s partner organizations from Sri Lanka also deployed staff members. A-PAD Bangladesh’s partner organization, Dhaka Community Hospital, sent a medical team and operated a mobile clinic. This was A-PAD’s first intercountry large-scale response and the importance of our activities has become known in Nepal.

For flood disasters in August 2017, A-PAD provided emergency assistance in Morang through a local NGO and provided winterization items including blankets and mattresses for low-income individuals.

Toward the Establishment of the 7th A-PAD Platform in Asia

A-PAD has conducted a series of needs assessments to establish a platform in Nepal. In 2021, two full-time staff were sent from Japan amidst the pandemic. The team has been coordinating the establishment and the approval from the ministry marks an important step toward building the national platform.

This project would not have been possible without our supporters. Thank you for your continuous interest and support in our disaster resilience building activities in Nepal.

You can donate here.