The state of emergency was declared in West Sulawesi from 15 January to 28 January after a magnitude 6.2 earthquake struck the province on January 15 and caused enormous damages. On January 17, the Indonesian National Board for Disaster Management reported at least 73 dead and over 700 people have been injured. In the provincial capital, Mamuju, hospitals, hotels, and many houses have been damaged and search operations for buried survivors are on-going. In Mejene near the epicenter, 27,850 people have evacuated (Indonesian National Board for Disaster Management, January 17)

A-PAD Indonesia has opened POSKO in Malunda with local disaster assistance NPOs, ACT, Skala, and disaster information channel, Disaster Channel. Trucks have been arranged to deliver food packages and installations of water facilities and portable toilets are underway for 15,000 evacuees. 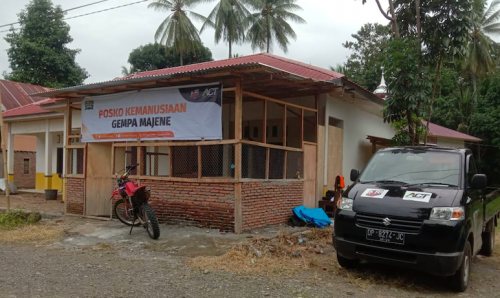 Donation campaign page was launched by the organizations here.

* POSKO: In Indonesian, “POS” means a post and “KO” means army. The world POSO originated from a frontline army post. “KO” was replaced with “CO” to express the words “communication” and “cooperation.” POSCO is a small unit of disaster-affected people and anyone can install POSCO. POSCO can mean a post as in space or a group that works in that space. During the 2009 Sumatra earthquakes, the Government of Indonesia restricted POSCO in order to streamline assistance activities. However, a number of POSCOs popped up organically and as a result, they ended up working with the government to support the reconstruction efforts. More on POSCO.