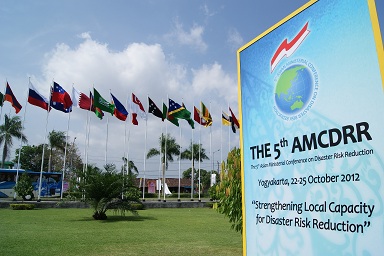 The 5th Asian Ministerial Conference on Disaster Risk Reduction (AMCDRR: http://5thamcdrr-indonesia.net/) took place in Yogyakarta, Indonesia, from 22-25 October. The conference provided a unique opportunity to ministers in charge of disaster management in the Asia-Pacific Region to reaffirm their commitment to the implementation of the ‘Hyogo Framework for Action (HFA)’. Among those countries that have hosted the previous AMCDRR are China (2005), India (2007), Malaysia (2008), and South Korea (2010). Under the theme ‘Strengthening Local Capacity for Disaster Risk Reduction’, more than 50 countries and regions gathered at the 5th AMCDRR; attending from Japan was Mr Azuma Konno, Senior Vice Minister of the Cabinet Office.

Preceding the opening of the 5th AMCDRR, Civic Force, together with disaster relief national platforms composed of NGO networks and business federations from Indonesia, South Korea, the Philippines, and Sri Lanka, announced the co-establishment of an unprecedented disaster-aid mechanism—namely, ‘Asia Pacific Alliance for Disaster Management’—on 21st October. A pre-conference and a booth were also set up to promote the Alliance’s concept and activity plan. 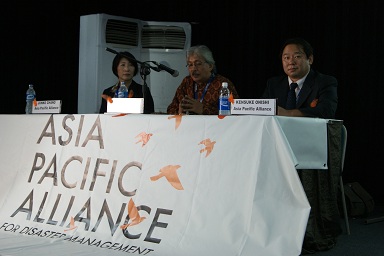 The Asia Pacific Alliance will facilitate collaboration among the private sector, government, and NGOs in cases of large-scale natural disasters in the region. Based on a pre-agreement to act together in disaster response, each member country will be able to share information, human and financial resources, and relief goods. It is this pre-agreement that will make it possible to deliver even more effective and efficient disaster aid assistance to as many people as possible. 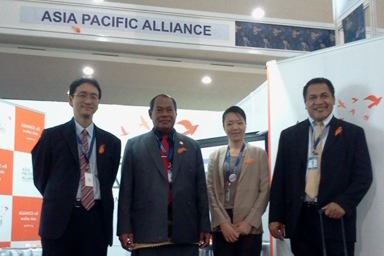 At the 5th AMCDRR, Dr. H. Susilo Bambang Yudhoyono, President of Indonesia, and other ministers and delegates in charge of disaster management in the Asia Pacific region visited the APA booth, asking questions as to the concept, progress, expected success, and prospect of the Asia Pacific Alliance. The launch of the Alliance was also conveyed by articles in several Indonesian national newspapers and television, the Nikkei, Jakarta Shimbun and other publications, which emphasized the significance of this mutual help mechanism that transcends borders between nations and sectors. 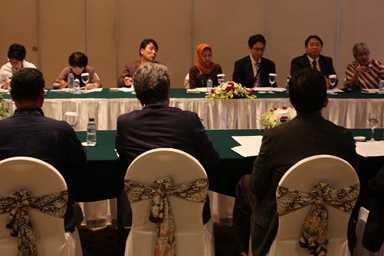