HOMENewsDelegation to South Korea, a call for support for the Asia Pacific Alliance

Delegation to South Korea, a call for support for the Asia Pacific Alliance

The Alliance Management Office together with Japanese Diet members Mr. Yasuhisa Shiozaki and Mr. Taro Kono went on an official visit to South Korea, one of the Alliance’s 5 founding member countries, from July 31 to August 1. The visit aimed to appeal for support from the South Korean government and to request its substantive participation in the Alliance. The meetings with Korean parliament members drew opinions from both sides regarding budget settlement and steps to be taken towards supporting the Alliance. The delegation also met with Korean media agency Korean Broadcasting System (KBS) and took the opportunity to discuss the possibility of creating a media-Alliance cooperation.

On the first day, the delegation met with Parliament members Tae-whan Kim (Saenuri Party Central Committee Chairman, Japan-Korea?Parliamentarian’s Union Vice-chairperson; Security Policy Committee Chairperson); and Yoon-joe Shim (Saenuri Party Korean Overseas Citizens’ Committee Director-General, Foreign Affairs and Trade committee member, South-North Relations Special Committee member) to introduce the Alliance and its accomplishments to date as well as to appeal for the Korean government’s?support for the Alliance’s goal to become an international organization. Mr. Kim and Mr. Shim both agreed to promote mutual understanding of disasters in the Asia Pacific region and to provide overall assistance to the Alliance. 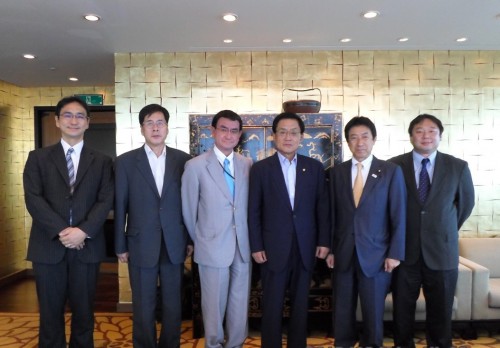 During the follow-up consultations with each Parliamentary member, they discussed the possibility of allocating a disaster response fund from the Korean government’s budget as well as an overseas disaster relief budget within the Ministry of Foreign Affairs and Trade. The Management Office will continue to follow-up the efforts of its partners in the Korean government to maintain smooth cooperation.

Visit to the Trilateral cooperation secretariat

The Trilateral Cooperation Secretariat (TCS) is responsible for promoting peace and common prosperity among the People’s Republic of China, Japan, and the Republic of Korea. The delegation visited the TCS office and held discussions with Secretary General Bong-gil Sin, who made clear the Secretariat’s willingness to support the Alliance. Japanese ambassador to Korea H.E. Koro Bessho also stated that a cooperation agreement with regards to the Alliance will be drafted between the two countries. 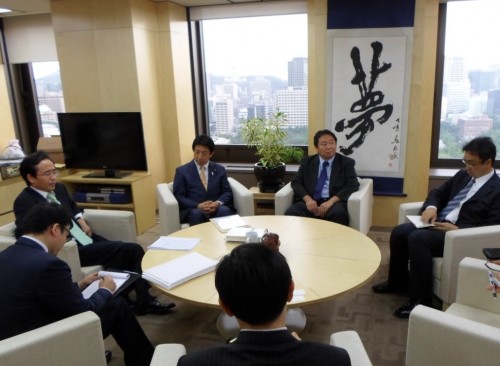 Towards collaboration with Korean media

The delegation also met with In-chul Jung from the Korean Broadcasting System (KBS), the country’s public broadcasting agency. Mr. Jung believed that as a broadcasting agency, its power is to show how the Alliance works with young people in disaster areas all over Asia, which could further deepen trust and understanding about the organization. By broadcasting such programs, KBS wishes to influence other media agencies in Asia as well as appeal for donations for disaster relief operations.

Moving forward, the Management Office and Korean NGO partner KDRA will take concrete steps to advance the formation of the Korean National Platform.