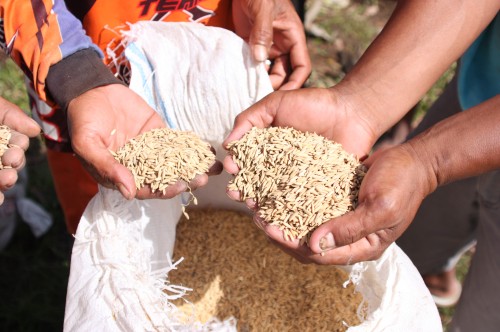 Japan National Platform representative Civic Force, together with Philippine National Platform representative CDRC and its regional center LCDE, continued their relief efforts in the typhoon-struck areas in Leyte province in the Philippines with an early recovery project launched in mid-February. Civic Force staff was deployed to Leyte on February 19th, and they oversaw the distribution of crop seeds as well as farm tools from February 21st to 23rd in three villages (barangay) in Alangalang Municipality. The distributed goods were for the benefit of 806 households who lost their livelihoods and belongings after the typhoon, so they can be able to restart their farming activities. One of the project areas, Barangay Langit, was also the recipient of Civic Force’s emergency relief assistance last November in which food and non-food items were provided to local residents. 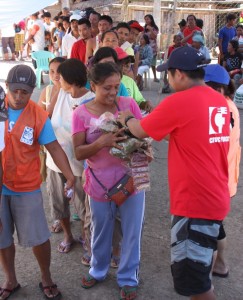 Based on the needs assessment conducted, in addition to 50 kilos of rice seeds, 10 kinds of vegetable seeds such as tomato, eggplant, mustard, radish, bittergourd, pumpkin, etc. were distributed. Rice seeds are expected to grow into seedlings in about 25 days, which are replanted and then harvested after 3 months. The farm tool sets included hoes, rakes, sprayers, shovels, wide blade knives, and harrows, with one pack to be shared between 10 households.

The livelihood assistance project amounts to about 107,000USD (4.6 million Pesos) and will be implemented for a period of 3 months. CDRC and LCDE staff will jointly conduct monitoring activities in the areas that received farming assistance.

About 100,000 USD of the total budget was donated by Lawson, one of the biggest convenience store franchise chain in Japan and a regular supporter of Civic Force’s activities. Lawson launched a Japan-wide donation drive soon after Typhoon Haiyan devastated Central Philippines, installing donation boxes in all of its stores, and pledging to donate a portion of the collected amount to Civic Force. APADM hopes that such private sector-NGO partnership in disaster response strengthens in each national platform moving forward.