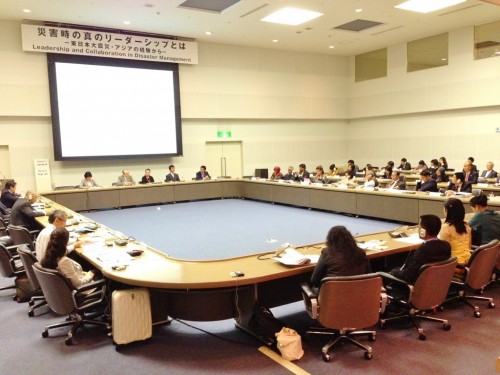 APADM and Japan National representative Civic Force (CF) jointly hosted an international symposium entitled “Leadership and Collaboration in Disaster Management” on May 13, 2014 at the Elizabeth Rose Conference Hall, United Nations University in Tokyo, Japan. In addition to a review of multisector efforts in Japan post- March 11, the symposium also aimed to talk about what leadership is in times of disasters.

The event was attended by APADM member country representatives from Japan, Indonesia, Philippines, and Sri Lanka, as well as observer country representatives from Bangladesh, Myanmar, and Brunei. In addition, 13 AHA Centre Officers from 7 ASEAN Countries also took part in the symposium. The officers were in the country for the Japan Study Tour implemented under the AHA Centre Executive (ACE) Programme, which is a disaster management training programme for ASEAN member countries and is supported by the Japan-ASEAN Integration Fund. 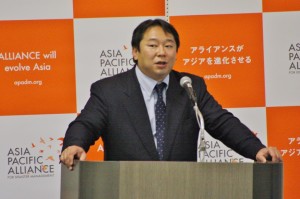 Following the welcoming remarks by Kensuke Onishi, Chief Executive Officer of APADM, in which he expressed gratitude to Sasakawa Peace Foundation, the sponsor of this symposium as well as other distinguished guests and participants, Yasuhisa Shiozaki, a member of the House Representatives welcomed the experts from ASEAN and confirmed his commitment to working with NGOs to provide immediate relief. He believes the APADM is an unprecedented international organization that should be supported by any means. ??Kimihiro Ishikane, Director General of the International Cooperation Bureau, Ministry of Foreign Affairs, talked about his deep involvement in disaster response in Asia Pacific and confirmed the importance of establishing networks, such as the APADM, in order to enhance resilience.

Lastly, Said Faisal, Executive Director of AHA Centre, expressed gratitude to the government of Japan for its support to ASEAN, a region that experiences many disasters, and he stressed the importance of collaborative leadership as the basis of humanitarian assistance.

?Session 1: Learning from the 3.11 Earthquake and Tsunami

The first session, moderated by Megumi Kuwana, Ritsumeikan University Associate Professor, aimed to review the collaborative efforts of the NGO, business and public sectors in the aftermath of the 3.11 and discuss lessons learned from each actor.

Masakatsu Okamoto, Director-General for Reconstruction Policy of the Reconstruction Agency outlined the Japanese government’s response after 3.11, including immediate mobilization of manpower for emergency and early recovery response, supporting local government units by boosting human resources, and cooperation with private companies and non-profit organizations.

Representing civil society, Kaori Neki, Executive Director of CF introduced their activities after 3.11, which was mainly on coordinating aid between the government, media, and private companies. CF was able to coordinate with 600 companies, 37 NGOs, and utilize social media to provide aid in the tsunami-affected Tohoku region in the short and long term.

Yoshikazu Ota, CEO of Heart International, a Japanese logistics company, explained how his company collaborated with CF to provide logistical support in delivering relief goods to the Tohoku area. He stressed that because they had previous experience with CF, they were confident in participating in the relief efforts and were able to build a trustworthy relationship. He hopes that other companies will realize that they can also do something to help in times of disasters.

As the last speaker, Akihisa Shiozaki of the Independent Investigation Commission on the Fukushima Nuclear Accident talked about the four pillars of leadership in crisis management: a flat communication hierarchy structure, foresight management, focused management, and fair communication. He stressed that Japan’s experience must be shared with its Asian neighbors so they can be prepared for the next disaster. 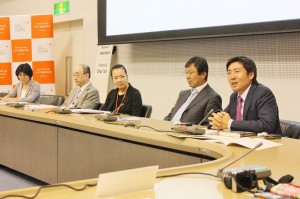 The discussion after session 1 was mainly on the importance of collaboration and communication as well as good leadership. ?The speakers stressed that the most important thing in collaboration is to establish trustworthy relationships beforehand and to have the willingness to provide support to others. APADM members and AHA Centre officers brought questions to the floor regarding maintaining partnerships and the Japanese government’s coordination with international organizations. Ms. Neki reiterated the importance of carrying out training, simulation, and sharing updated information with your partners. Mr. Okamoto emphasized the need for the government to be more integrated with the private sector in its response.

The second session, moderated by Nobutaka Murao of Kwansei Gakuin University, focused more on the aspects of leadership and necessary traits of leaders who respond in times of disasters.

Faisal Djalal, Chairperson of APADM presented several definitions of leadership and stressed that a disaster management leader must be able to see and react through the whole cycle of disaster management from preparedness to mitigation to response and rehabilitation. He acknowledges the leaders of APADM and their qualities.

Next, Kensuke Onishi explained his NGOs’ efforts in responding to the crisis in Kosovo and Niigata and confirms that knowing how to use available resources is an important trait of a leader. In addition, preparing for the worst case scenario is key. When such a case happens, the leader must be willing to go on-site and make effective decisions. 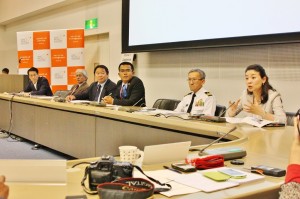 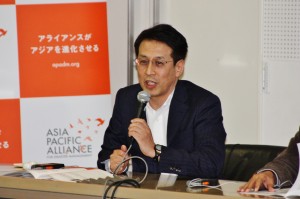 Representing AHA Centre’s ACE Programme, Hari Susanto from Indonesia talked about what makes a leader in disaster management. He says that a leader must have the will to cope with disasters and work with others in unstable and stressful conditions. He stresses that the ACE Programme is composed

Takuya Shimodaira of the Maritime Staff Office introduced the experience of Japan’s Self Defense Forces in coordinating with the American navy after the Tohoku earthquake. He concluded that leaders need to coordinate with each other to share knowledge and experience?of leaders from different countries who share and have unique qualities.

Managing Associate Professor at Tohoku University Takako Izumi stressed the importance of involving local stakeholders who are usually tasked to manage response efforts in the Asia region. These local stakeholders such as academia, media, and private sector may support the traditional stakeholders because they understand the risks and capacities and have their own resources.

In the discussions after the presentations, the speakers commented on the importance of having leaders at the community level as well given that they are at the frontline of emergency response when disasters strike. ?Community expectations must also be managed even before a disaster, and this is where local stakeholders can come in.

?In closing, Win Ohnmar, a representative of the ACE Programme Officers from Myanmar said that she learned a lot about Japan’s response and recovery activities after disasters and expressed gratitude to the government of Japan for its continuous support to ASEAN and for making the ACE Programme possible.? Executive Director of Sasakawa Peace Foundation Junko Chano explained her Foundation’s support for APADM since its pre-inception period, citing that APADM has success, values, and strong leadership. She confirmed SPF’s continuous involvement with APADM moving forward. The symposium came to an end with Faisal Djalal’s remarks in which he thanked all the participants and reminded all to continue working together for the future. 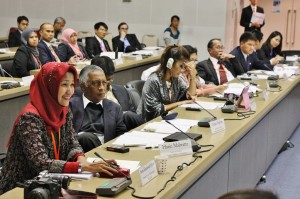 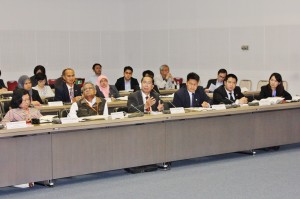 APADM and Civic Force would like to thank the participation of the general public and media in this symposium. We are pleased to enhance our partnerships within the country members of APADM and with ASEAN in order to achieve our goal of providing disaster aid quickly and efficiently.