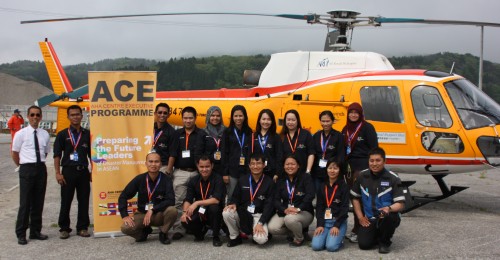 “Did a tsunami come through here as well?” It was this trainee’s first visit to Tohoku, and his expression was one of surprise as he witnessed the widespread damage caused by the tsunami and the ongoing work of inflating the land level of the coastal areas dotted with the coming and going of large vehicles and heavy equipment. The trainee is actually one of the officers of the ASEAN Coordinating Centre for Humanitarian Assistance on disaster management (AHA Centre), which is responsible for sharing disaster information between ASEAN nations and coordinating emergency response in the region. Since January this year, 13 disaster management officers from 7 ASEAN countries have been participating in the 6-month long training called the AHA Centre Executive programme (ACE Programme).

As part of this programme, Civic Force and Asia Pacific Alliance for Disaster Management organized a 6-day training in Japan from May 12 to 17 for the officers. In addition to a courtesy call with Deputy Chief Cabinet Secretary Mr. Hiroshige Seko, the participants attended a lecture at the Reconstruction Agency and an international symposium for disaster aid leaders in Tokyo. For the Tohoku leg of the training, the participants visited Kesennuma City, Miyagi Prefecture and Rikuzentakata in Iwate Prefecture.

One of the site visits in Kesennuma City was conducted through the cooperation of Kesennuma Reconstruction Association, who organized a site visit to the middle school on the hills of Shishiori village. On these grounds several temporary houses stand. The ACE Programme officers had lively discussions with the residents, who talked about their experience of losing their houses in the 2011 tsunami and having no choice but to stay longer than 2 years as originally planned.

On the second day of the Tohoku leg, the participants paid a visit to the Kesennuma city hall where they were able to hear directly from the Kesennuma City Mayor about their experience during the earthquake and tsunami. The ASEAN officers expressed their interest and put forward important questions on multisector collaboration and disaster management education. They also visited the project site of local NGO All-Round Helicopter and learned about how the helicopter was used to help survey the disaster areas immediately after the tsunami and how it is being utilized now to help the local population receive emergency healthcare. 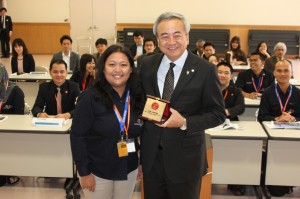 During the bus ride from Kesennuma City to Rikuzentakata, the participants also witnessed the unfolding of the disaster zone outside their windows as they took in the post-tsunami landscape and continuously asked questions about the situation then and now. After their 6-month training under the ACE Programme ends, they are expected to go back to their home countries as experts on disaster management and fulfill their roles as disaster management leaders. Civic Force and APADM will continue to support and cooperate with AHA Centre in enhancing ASEAN countries’ disaster management capabilities in order to foster a system that will allow for speedy and efficient emergency response activities in times of disasters.