Search and rescue team with 2 dogs land in the most affected area, Northern Samar, in two helicopters and one Cessna

Previously a super typhoon, Hagupit made landfall on December 6th in Eastern Samar and brought strong winds and heavy rain on Leyte and Samar which had received severe destruction after last year’s Typhoon Haiyan. According to initial reports, several areas have plunged in darkness due to power blackouts and roofs of houses have been blown off. The National Disaster Risk Reduction and Management Council has said that more than 1 million people have been evacuated to schools and churches as of December 8th.

Expecting severe damage to the areas in the typhoon’s path, Asia Pacific Alliance for Disaster Management (A-PAD) CEO Kensuke Onishi headed for Cebu, Philippines on December 4th and began preparations for emergency response. He and his search and rescue team( 8 members including a doctor, and two rescue dogs) departed today, December 8th, in two choppers and a Cessna for Samar, one of the provinces that has experienced severe damage so far. The planning was done in cooperation with local partner Citizens’ Disaster Response Center (CDRC) and it is expected that immediate disaster relief activities including rescue by trained S&R dogs will be conducted. Upon landing in Catarman airport in Northern Samar, Mr Onishi noted that “Many trees have been felled and roofs blown off. We will coordinate and discuss with the local disaster management authorities regarding the areas in need of assistance.” 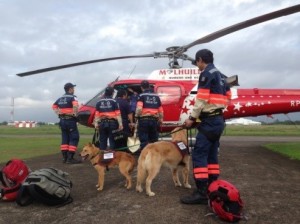 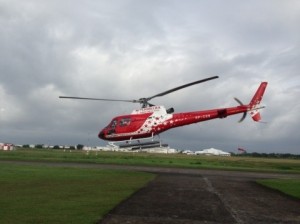