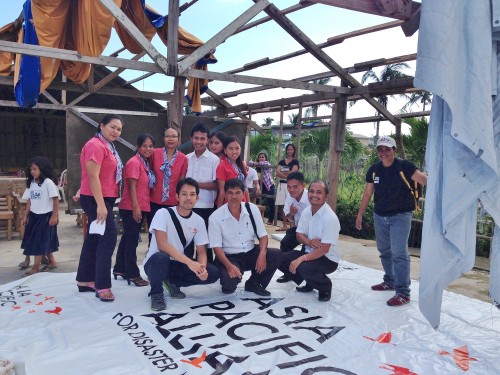 Almost 4 million people were affected by typhoon Ruby (international name Hagupit) in the Philippines. According to the National Disaster Risk Reduction and Management Council (NDRRMC), Ruby left 18 people dead and 916 injured. In addition, NDRRMC reported 42,466 houses were totally damaged and 248,204 were partially damaged.

The path of the typhoon was almost the same as Typhoon Haiyan which hit the Philippines on Nov. 8, 2013. Most of the victims are still undergoing rehabilitation after Haiyan when Ruby destroyed their new houses and farm outputs which were ready for harvest.?However, in the latter part of December 2014, tropical storm Senyang (international name Jangmi) also hit Samar and Leyte islands. It caused flooding and landslides in many places. People who were living in these areas are suffering terrible damage due to the typhoon and it also affected their lives economically and psychologically. 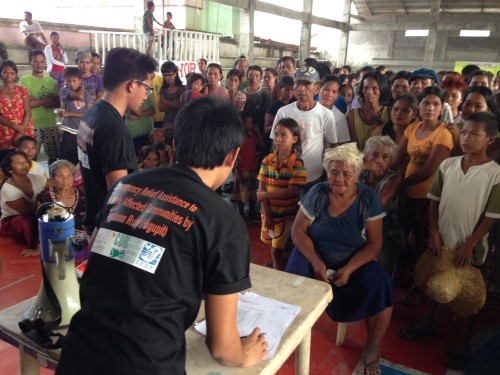 In response to the needs of the communities, A-PAD, Citizens’ Disaster Response Center (CDRC) and its regional partner Leyte Center for Development (LCDE) conducted Relief Delivery Operations (RDO) to distribute relief packs to the municipalities of Lope de Vega and Mapanas in Northern Samar province from January 14-16, 2015.?Relief packs each contained 25 kilos of rice, 1.5 kilo of dried fish, 1 kilo of mung beans, 12 cans of sardines, 2 liters of cooking oil, blanket, sleeping mat and hygiene kit. The packs were distributed to a total 650 families whose houses were totally destroyed or washed out by the storm surges.

?A-PAD also donated tarpaulins to 4 elementary schools and 1 high school in Mapanas Municipality as temporary replacement for destroyed roofs. After the typhoon, these schools held classes outdoors. A-PAD hopes that the temporary roofing can support the school so that students can continue their classes in their classrooms.

The relief program was supported by the local government of Mapanas, Northern Samar, which organized police officers as security and some DSWD staff members as volunteers during the relief distribution in the communities. Mapanas Municipality’s Vice Mayor, Roger T. Longcop attended the distribution of relief packs.

My house’s roof was ripped off due to the strong winds of Typhoon Ruby. I was evacuated to the barangay captain’s house with my wife during the typhoon. I think there were about 50 families in his house. My coconut trees were also terribly damaged. This kind of assistance is really beneficial to those affected like me. Thank you A-PAD.

I’m living with my husband and 5 children. My husband earns money from coconut harvests. Typhoon Ruby caused extensive damage to our farmland and our house was destroyed when a big tree got uprooted and fell on it . Now we are living in a small house which we built by ourselves after the typhoon. We got so many goods from A-PAD, we are so happy.

I used to live by the sea but my house was washed out by the storm surge. I was evacuated to another barangay during the typhoon, but I lost everything. I built a small house, so these relief goods are really helpful to me. Thank you.