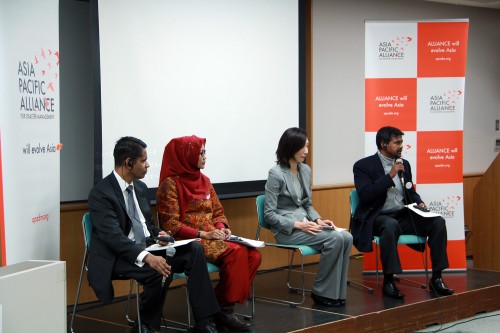 On March 14th A-PAD successfully hosted a Public Forum side event during the 3rd UN World Conference on Disaster Risk Reduction, which was held in Sendai, Japan, one of the most severely devastated cities in the Tohoku region after the Great East Japan Earthquake in 2011. Sendai has been on the road to recovery and was the fitting host for the conference which was attended by thousands of delegates from Japan and around the world.

A-PAD’s public forum entitled “The forefront of disaster response with private sector partnership: Innovations to achieve disaster risk reduction, response, and reconstruction beyond sectors and national borders” was held on the opening day of the WCDRR and was attended by more than 70 participants. The speakers included A-PAD members from 5 countries and representatives from the private sector in Japan. A-PAD CEO Kensuke Onishi gave the opening remarks at the event which aimed to introduce examples of collaboration implemented by companies, NGOs, and government during disasters while discussing the key role of the private sector in this system.

In the first session, private sector representatives from Sri Lanka, Indonesia and Japan shared the perspective of companies and their experience in contributing to disaster preparedness, relief and recovery efforts in their countries. It was followed by a panel discussion and Q&A wherein several members of the audience actively put forward their questions. The second session had representatives from Indonesia, Philippines, South Korea and Sasakawa Peace Foundation discuss about the wider role of A-PAD in Disaster Risk Reduction in the Asia Pacific region, especially in bringing together people from different sectors to work together on the ground and collaborate in various ways.

A-PAD also set-up a Public Forum exhibition booth during the conference week from March 13 to 18 at the 5th floor of Sendai Mediatheque. A-PAD’s introduction video was shown (linked below) and pamphlets were distributed at the booth. The UN estimates that more than 40,000 people attended the Public Forum and main conference.