Typhoon Soudelor swept across Taiwan on August 8 and brought extremely heavy rainfall and strong winds. The storm has caused massive damages across Taiwan, triggering landfalls and ripping up trees. As of 6 p.m. on August 8 local time, it reportedly left at least six people dead. 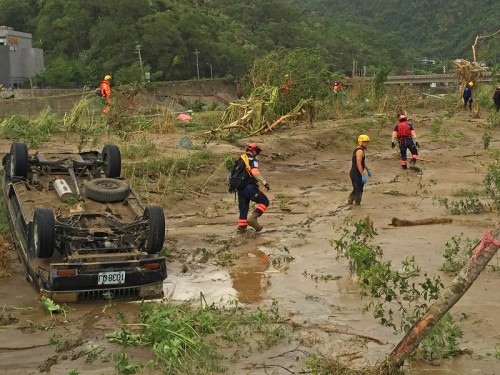 Asia Pacific Alliance for Disaster Management (A-PAD) and its partner organization Peace Winds Japan (PWJ) had dispatched the joint emergency relief team to Taiwan before the typhoon struck, assuming major damages from it.

Immediately after the typhoon passed Taiwan, the team started the investigation of damages along with the local police and fire departments and Taiwan Root Medical Peace Corps , A-PAD’s local partner organization. Yumenosuke and Hulk, trained search and rescue dogs, were also engaged in the investigation.

The team consisting of ten staff members and the two search and rescue dogs then undertook search and rescue activities at Xindian District in New Taipei City, about one-hour south of Taipei City. It is reported that the district has been damaged by a landslide, and one man, aged 62, is missing.

According to a local resident, the water level of Nanshi River rapidly ascended due to heavy rainfalls, and the first floor of the two-story buildings was flooded on the morning of August 8. Another local resident witnessed the missing was swept away by the flood at around 7 a.m. on that day.

The team conducted search and rescue activities along the river, but rubble, mud, and vehicles in the river made the search activities extremely challenging . The team has not found the missing yet and continues search and rescue efforts in close collaboration with the local government, police and fire departments, and its partner organizations.