Typhoon “Bopha” (locally known as “Pablo”), made a landfall on December 4, 2012. Soon after the Typhoon Bopha passed Philippines, Citizen’s Disaster Response Center (CDRC), as Philippines National Platform, began collecting information of heavily affected area on the eastern coast of Mindanao through support of their partner NGOs. After the consultation with all the partners in Mindanao, CDRC appealed for help. To respond the appeal, Civic Force (CF), as Japan National Platform, started fund-raising.

The one of the project, CF and its sister organization, Peace Winds Japan, have provided relief assistance through CDRC and its partner organization, Mindanao Interfaith Service Foundation Inc.(MISFI) to 1,200 families at Davao Oriental Province, Baganga Municipality, Philippines, which located in the eastern coast of Mindanao. The funding for this project was sourced out from Japan Platform (JPF) amounting to $70,000 US dollars and some fund from CF.

As of December 25, 2012, National Disaster Risk Reduction and Management Council (NDRRMC) announced 1067 death and 834 missing. Especially in Davao Oriental Province, most houses were damaged due to the strong wind and rain of the typhoon and some people are still living at an evacuation center. Even some evacuation centers was damaged which forced people to stay at their relative or original place where does not have a roof. With the relief assistance, CF and PWJ distributed 1 week amount of food and non-food item, which include a plastic sheet to use as the house of roofs. 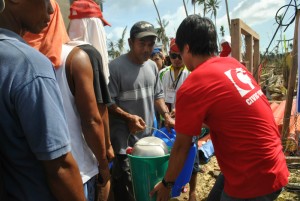 CDRC together with MISFI and CF continue assisting the Typhoon Bopha victims.