On January 15, a magnitude 6.2 earthquake struck West Sulawesi, Indonesia, causing damage across the region. A-PAD Indonesia provided emergency relief assistance immediately after the onset of the disaster. From February 5-11, A-PAD Indonesia and a local NGO, ACT, assisted the victims in Mamuje and Majene. 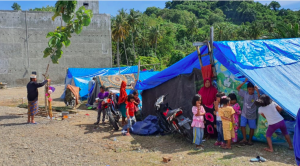 ACT delivered hot meals to 5 evacuation camps set up in Mamuju and Majene. Many families are still unable to go home since the earthquake destroyed their homes three weeks ago. Access to some villages were cut off and the ACT staff delivered 250 meals on foot (pictured below). “The villagers were very happy to receive our assistance since little help reached them since the disaster,” said an ACT staff member. 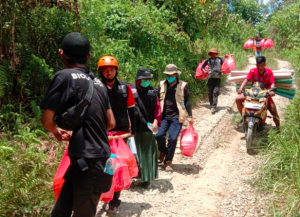 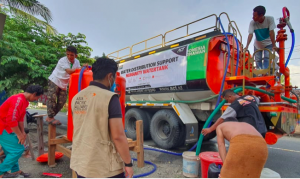 ACT visited affected areas with limited access to water in Mamuju and Majene on February 6 and 9 to provide safe water. Villagers waved as ACT’s water truck drove in to distribute water.

After the earthquake, evacuation camps were set up in empty plots, but they did not have direct access to water. A-PAD Indonesia and ACT are working together to install water tanks and hand washing stations. 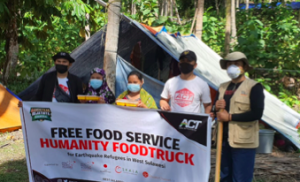